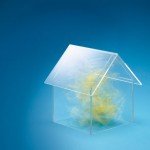 The Christmas tree has been taken down, lights packed away. With the cold dark winter nights and valentine’s day upon us, there is no better time to light up the scented candles you were given during the holidays.  There is, however, a potential risk  due to the harmful chemicals that are used to create fragrance products.  Here are a few tips to combat indoor air pollution, caused by scented candles.

The idea of “lemon-fresh” and pine scent is wonderful, but have you ever stopped to consider the chemicals required to create such scents? While the chemicals themselves are not harmful, once they are released into the air should be of concern.

One of the known secondary products of all fragrance chemicals once they react to the air is formaldehyde. Formaldehyde is a member of the volatile organic compounds family (VOC’s).  A known carcinogen formaldehyde in small concentrations are a normal part of our environment.  However, high level exposure can irritate the skin and cause difficulty breathing.

Professor Alastair Lewis from York University, set up an experiment to measure levels of chemicals releases in homes. Six homes throughout the York region with similar outdoor air quality were selected.  Professor Lewis placed air samples in each house for five days to compare the levels of chemicals found and what the chemicals were.

Initially, all six houses had comparable levels of most chemicals except the ones from fragrance.  Three  homes were tested for formaldehyde.  Studies showed that for every 2 molecules of lemon scent released into the air, on molecule of formaldehyde was found to be present.   Three of the six houses had higher levels of limonene and alpha pinene, the chemicals responsible for “lemon scent and “pine scent””.  The experiment determined that high levels of formaldehyde correlated with levels of limonene and alpha pinene.

Now, this is not to say you should throw out all your scented candles and stop washing your floors.  However, it may be a good idea to add some houseplants to your home.  Certain plants have the ability to remove toxic agents from the air naturally.

As part of the experiment, professor Lewis’ team placed four houseplants in each of the three houses that showed high formaldehyde levels for four weeks. The plants chosen were the spider plant, dragon tree, golden pothos and English ivy, are some of the known houseplants that can improve your indoor air.   Once the four weeks was over, he again took air samples from the home.  The study showed that the levels of formaldehyde fell in all three homes, indicating that the plants could indeed play a role in reducing the levels.

Noting that we can control the levels of chemicals in our homes by using less fragrances and choosing fragrance free cleaning products. The next time you choose to light a scented candle, be sure to open a window for proper ventilation.  Better yet, invest in some greenery.  Following these tips to combat indoor air pollution,  are a sure to improve your indoor air quality and create a healthier in home environment for you and your loved ones.